Brought to you by OHCOW, and the Occupational Disease Action Plan Contributors, this tool* allows the calculation of the adjusted workplace exposure limit for an unusual or extended work shift which has been adapted using the methodology set out in the Guide for the Adjustment of Permissible Exposure Values for Unusual Work Schedules (March 2015), published by Quebec’s Institut de recherche Robert-Sauvé en santé et en sécurité du travail (IRSST). 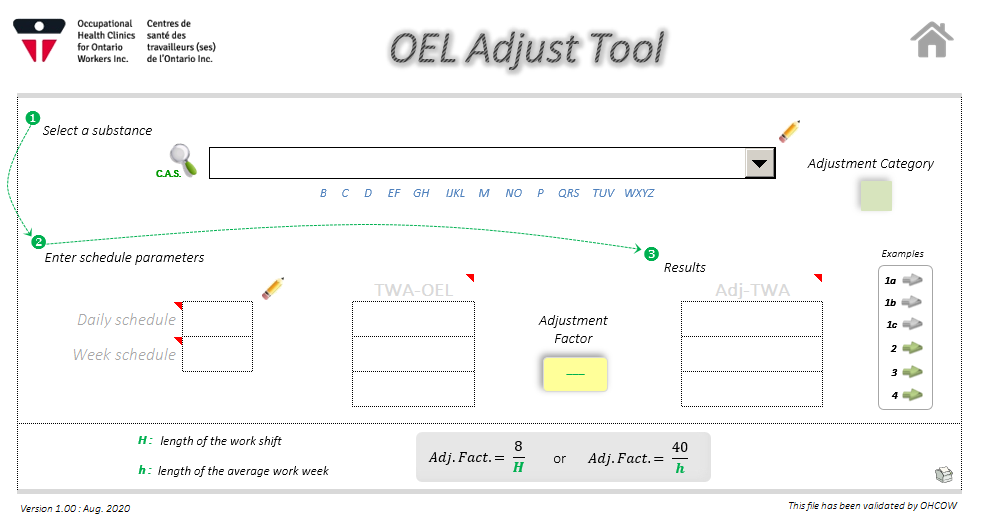 This method, used in the Province of Quebec and referenced by the ACGIH and other health and safety organizations, considers toxicological information such as sensitization, irritation, organ toxicity, reproductive system toxicity  and teratogenicity, in addition to exposure and recovery times.

Irregular work shifts are now commonplace in many industries and the standard eight-hour work day/40 hour work week (which has been the basis for the time-weighted average (TWA) occupational exposure limits) is often not the reality. To address this change, exposure standard adjustments have increasingly become an essential component in workplace exposure assessment.

IMPORTANT NOTE
The file works ONLY if the macro security level of Excel is set to “enable all.”
Detailed instructions are provided at the bottom of the Tool’s Intro page by clicking on the Important arrow.

Have questions regarding the OEL Tool, or would like to speak to an Occupational Hygienist for more information regarding exposure assessments or occupational disease prevention?
Contact OHCOW using OEL Adjust Tool as the subject.