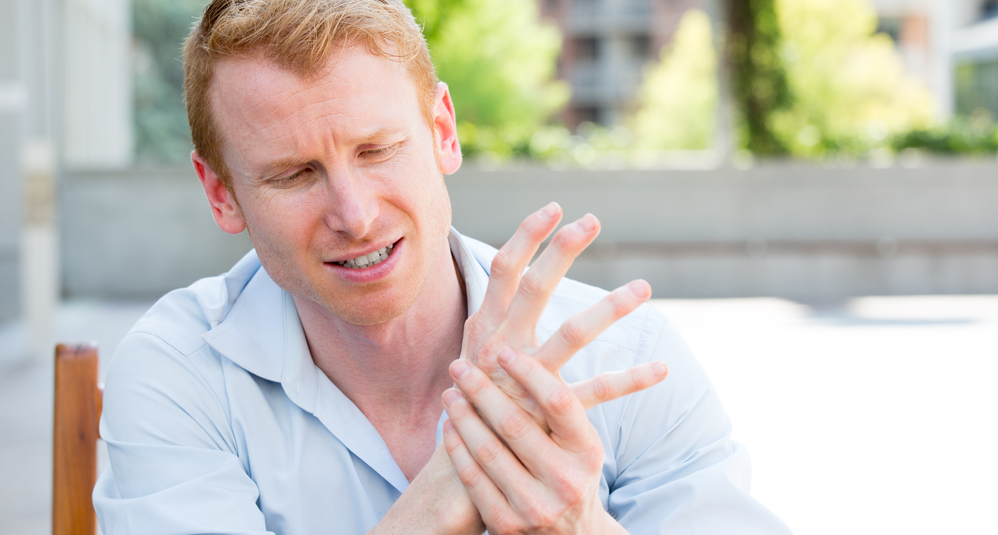 What is the Carpal Tunnel?

The carpal tunnel is a narrow, rigid passageway of bones at the base of the hand (wrist), while the top is formed by the Transverse Carpal Ligament.  Tendons pass between these two structures allowing movement of the fingers.  The median nerve (a nerve that runs down the arm and forearm) passes through the carpal tunnel and into the hand and gives sensation to the thumb, index finger, long finger, and half of the ring finger.   The tendons are important because they allow movement of the fingers, thumb, and hand (i.e. grasping). These tendons are covered by a substance called tenosynovium, which is a slippery covering that allows the tendons to glide next to each other as they are worked.

Carpal tunnel syndrome (CTS) is a disorder characterised by tingling and pain in the hand and fingers due to damage to the median nerve.  The pain may radiate up the arm as far as the elbow; although, not usually into the elbow itself.  The median nerve is one of three major nerves of the upper arm that contains motor, sensory, and autonomic fibres.  Injury of the median nerve results in a disruption of nervous function in the first three and one-half digits and the thenar eminence (body of muscle on the palm of the hand just beneath the thumb.) Compression (squeezing) of the median nerve in the carpal tunnel is the most common nerve entrapment syndrome.  CTS is usually idiopathic (of unknown cause - 47% of cases), but it may also result from a variety of processes that decrease the space of the carpal tunnel.

Refers to compression of the median nerve at more than one location.  This is typically seen in the wrist and in the neck/shoulder area.  If you're suffering from CTS, please be sure your doctor has thoroughly examined you to determine if your CTS is due to a Double Crush Syndrome. A hand specialist may overlook a Double Crush originating in the neck. A proper examination for CTS would include the entire arm and neck in order to trace the full length of the nerve, especially if they've been recommended for carpal tunnel surgery.

There are a number of risk factors related to the development of CTS including awkward postures, force, repetition, and vibration exposure. Continued or sustained exposure to any or all of the risk factors could result in a musculoskeletal injury.

Flexion, extension, radial, and ulnar deviations of the hand are considered awkward postures of the wrist and aid in the development of CTS by stretching and irritating the median nerve.  When the hand is placed in a position outside of its neutral position, it causes the tendons to rub against the walls of the carpal tunnel and cause friction.  The tendons of the wrist are surrounded by a synovial membrane which secrets synovium, a lubricating fluid.  When friction is present, the membrane produces fluid to limit the friction.  However, since the wrist only has a certain amount of space the swelling reduces the space of the carpal tunnel, compressing the median nerve.  Awkward postures also reduce the blood flow to tissues.  This reduces the clearance of waste products from the joint, which causes discomfort and fatigue of tissues from having to hold tensed muscles in a fixed or awkward position for a long periods of time. Awkward postures such as working with the joints near their end range of motion, uneven loading and static muscle activity are all risk factors in the development of CTS.  They increase the biomechanical stress on the muscles and the surrounding joint tissues.

In extreme joint positions, such as with a flexed or extended wrist, the muscles are also not at their optimal working length.  Therefore, the muscles are incapable of developing force as efficiently and are more likely to fatigue 5, 6.  Static muscle activity can also increase the risk of developing CTS since static muscle contractions can lead to reduced blood flow and increased compression on the median nerve.

Force refers to the amount of physical effort that is required to accomplish a task or motion. Tasks or motions that require application of higher force place higher mechanical loads on muscles, tendons, ligaments, and joints. Tasks involving high forces may cause muscles to tire more quickly. High forces also may lead to irritation, inflammation, strains and tears of muscles, tendons and other tissues.

When force is applied repeatedly over a prolonged period to the tendons found in the carpal tunnel, the cumulative forces may cause soft-tissue microtears (small tears found in tendons, ligaments and muscles) and trauma.  High muscle force requirements may also cause increased muscle contractions and can lead to muscle fatigue and tendon tension.  It is when fatigue is present and the muscle tension is high that a worker is placed at an increased risk.  This is because the muscle becomes weaker and more susceptible to failure.  As the tension increases, the muscle tendon becomes elongated and loses the ability to maintain force.  This is much like stretching an elastic band.  As we pull on the band with a constant load, it begins to stretch until we reach the point where we have exceeded its capacity to bear the weight of the load.  As a result, the band snaps due to its inability to withstand the tension applied to it. The resulting injury applied to the muscle tendons and the inflammatory response results into the compression and reduction of the blood supply to the median nerve and the development of CTS. Excessive force should also be minimized in an effort to reduce the risk of developing CTS.  Researchers have recommended the force requirements of a job should not require exertion of more than 30 % of a workers maximal muscle force for a prolonged or repetitive period of time.

Strong gripping and pressure on the palm can also increase the risk of CTS.  This is typically known as a pinch grip.  This is when an object is held between the fingers and the thumb.  A person engaged in a pinch grip, is only able to generate 25% of a power grasp or gross grip.  A “power grasp”, refers to a grip using the whole hand where the force is passed through a large number of muscles, unlike the pinch grip which has a high amount of force passing through a small number of muscles increasing the risk of tearing and further injury.  To generate a specific force, a pinch grip requires a much greater muscle exertion than a power grip (object in the palm of the hand). Hence, a pinch grip has a greater likelihood of creating injury.  This is due to the fact that with a pinch grip, only a few muscles are trying to perform a task requiring a high degree of force or effort opposed to a power grasp.

Repetition is defined as the number of movements in a given period of time. Safe limits of repetition depend on frequency, speed and duration. A highly repetitive movement is considered one in which more that 50% of the shift is spent completing that movement, whereas a low repetitive movement is one in which less then 50% of the shift is spent completing that task.  Operating tools and equipment can force the wrists of the worker to go from ulnar deviation to radial deviation within a short time interval.  This results in strain being placed upon the muscles.  These rapid motions often result in fatigue and increased friction on the tissues located within the carpal tunnel. These repetitive motions also elevate the pressure inside the carpal tunnel, which may diminish blood flow to the median nerve and cause blocking of the nerve.  This is a result of strain being placed on the muscle tendons.  If sensory function is impaired (a normal response), the worker may also adopt a more forceful grip, awkward posture, or other compensatory maneuvers increasing the risk of developing CTS. Repetitive actions require rapid muscle contractions which do not flavor optimal force production, therefore, faster contracting muscles have to work harder to generate the same amount of force and will need longer recovery times when compared to slower contracting muscles.  If a muscle group is not given enough time to recover between repetitions, muscle and joint soreness will escalate and can lead to a cumulative trauma injury.

Vibration has been shown to have a causal relationship on the development of CTS though it is not well understood.  Vibration exposure is usually accompanied with exposures to forceful and repetitive motions and awkward postures, and seems to affect the circulatory (blood vessels), nerves, and muscles of the wrist.

Vibration as the primary cause of CTS is due to the vibration-induced oedematous (swelling) reaction in the median nerve itself and in the tissues surrounding the nerve.

Hand vibration reduces the circulation in the hands and fingers causing blanching (loss of normal colouration).  This is a result of the reduction in blood flow and a reduction of the delivery of oxygen and nutrients to the hands and fingers.  Severe cases can develop into gangrene in the affected digits.  It is believed that blanching occurs due to hypertrophy (enlargement) of the cells resulting in the narrowing of the arteries and therefore reducing the amount of blood that can flow through them at a given time.

Damage to the nervous system has been found to cause median nerve damage. Swelling will also result with the accumulation of scar tissue and compression on the median nerve. This is a result of demyelination (loss of myelin that surrounds the nerve).  Myelin protects, electrically insulates each nerve fiber, and increases the speed of transmission of the nerve impulses. Myelin is also non-regenerative, meaning that once it is damaged it cannot be fixed.  Demyelination results in a slower and weaker conduction speed in nerve impulses due to lack of insulation.  Myelinated nerve fibers have a conduction speed that is 150 times faster than that of unmyelinated fibers.

Muscles exposed to vibration exhibit a tonic (stimulating) vibration reflex that leads to increasing voluntary muscle contraction.  Vibration has also been shown to produce short-term tactility impairments which can lead to an increase in the amount of force exerted during manipulative tasks.  Vibration can also lead to mechanical abrasion of tendon sheaths.  It may also directly injure the peripheral nerves, nerve endings, and mechanoreceptors in the hands and fingers, producing symptoms of numbness, tingling, pain, and loss of sensitivity.  The sustained awkward postures they are required to maintain to hold and operate the equipment, the controls they are required to operate and the vibrating environments in which they work are major risk factors.

Exposure to hand vibration may also affect the musculoskeletal system.  A vibrating tool requires much more energy to hold and operate than a non-vibrating tool.  This leads to an increase in muscle activity causing swelling of the muscle tendons and compression on the median nerve.  Fatigue will develop faster and cause one to be more susceptible to injury.

Cold temperatures have been linked to the development of CTS by affecting nerves to the skin, blood circulation, manual dexterity, and grip strength.

Many professionals when assessing the extent of CTS tend to focus solely on the repetitiveness of the job, but this should not be the case.  There are other factors which are present in the development of CTS including force (the amount and strength associated with using the keypad, and also posture of the wrist and forearm).  It is believed that it is the synergistic (combination) actions that result in the development of CTS.  An example would be the combination of repetition with a job demanding awkward postures of the wrist and high force when using the keypad. 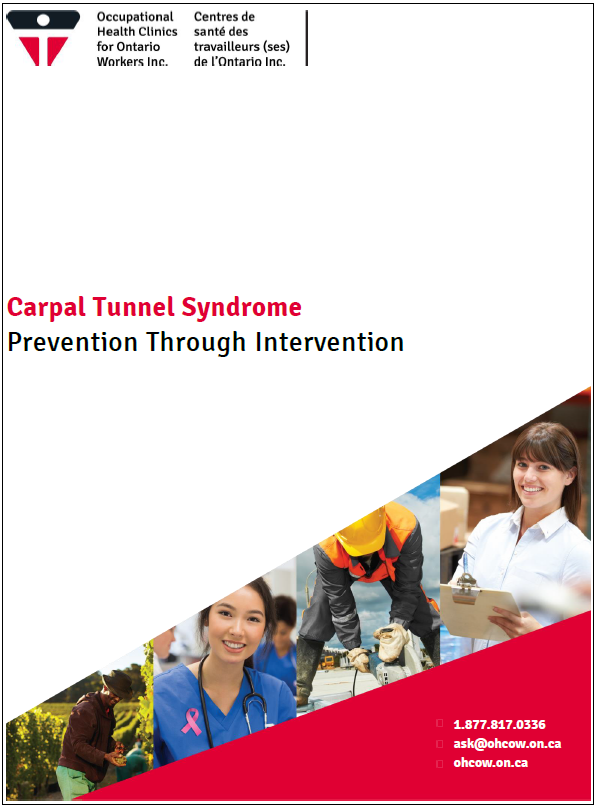